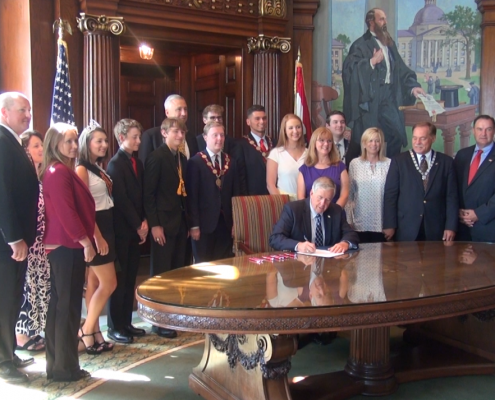 “Now Therefore Be It Resolved that the members of the Missouri Senate, Ninety-eighth General Assembly, First Regular Session, the House of Representatives therein, hereby recognize Missouri DeMolay as an Institution of Higher Education and designate March 18th of each year as DeMolay Day and recommend that the citizens of the state engage in activities and conscious awareness to highlight the importance of youth leadership, rewarding higher-education and learning the cultural and historical significance of Freedom of Thought, Freedom of Religion, and Freedom of Speech, in conjunction with the recognition of the consecrated leadership and wisdom of those who came before us who established, fought and died for the perpetuation and preservation of such high universal ideals throughout the world.”

The LIGHT Foundation applauds the program and vision of Missouri DeMolay through their work in youth civic responsibility and leadership development.

Join Us For the Inaugural DeMolay 5K Fun Run/Walk